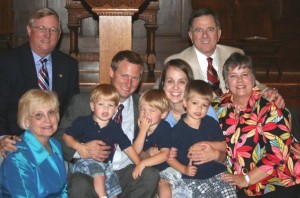 About Us: Our History

The Gideons International, founded in 1899, serves as an extended missionary arm of the church and is the oldest association of Christian businessmen and professional men in the United States of America. Here are some highlights from our long history of service:

The Idea—In the autumn of 1898, John H. Nicholson of Janesville, Wisconsin, came to the Central Hotel at Boscobel, Wisconsin, for the night. The hotel being crowded, it was suggested that he take a bed in a double room with Samuel E. Hill of Beloit, Wisconsin. The two men soon discovered that both were Christians. They had their evening devotions together, and on their knees before God the thoughts were given which later developed into an association.

First Meeting Called —On May 31, 1899, the two men met again at Beaver Dam, Wisconsin, where they concluded to band Christian commercial travelers together for mutual recognition, personal evangelism, and united service for the Lord. They decided to call a meeting in Janesville, Wisconsin on July 1, 1899, in the Y.M.C.A.

“We shall be called Gideons.”—Only three men were present at that meeting: John H. Nicholson, Samuel E. Hill, and Will J. Knights. They organized with Hill as president, Knights as vice president, and Nicholson as secretary and treasurer. Much thought was given to what the name of the association should be, and after special prayer that God might lead them to select the proper name, Mr. Knights arose from his knees and said, “We shall be called Gideons.” He read the sixth and seventh chapters of Judges and showed the reason for adopting that name.

Effective Witnesses in Hotels—In view of the fact that almost all of the Gideons in the early years of the association were traveling men, the question quite naturally arose regarding how they might be more effective witnesses in the hotels where they spent so much of their time. One trustee went so far as to suggest that The Gideons furnish a Bible for each bedroom of the hotels in the United States. He commented, “In my opinion, this would not only stimulate the activities of the rank and file of the membership, but would be a gracious act, wholly in keeping with the divine mission of the Gideon Association.” This plan, which they called “The Bible Project” was adopted at Louisville, Kentucky, in 1908.

Church Support—It is interesting to note that the practice of the churches contributing to the support of the Gideon Scripture program originated with a pastor. Just two months after the 1908 Louisville Convention, a state convention convened in Cedar Rapids, Iowa. National Secretary Frank Garlick and Mr. A. B. T. Moore attended a meeting of the Ministerial Union, and after their program they asked if Brother Garlick could address the ministers on the work of the Gideon Association. He spoke of the needed Bible distribution, and at the close of his 10-minute address, Mr. Moore’s own pastor, Dr. E. R. Burkhalter, First Presbyterian Church, arose and moved, “…that Gideon Bibles be placed in all local hotels and that the Union be responsible for the funds.” The motion was unanimously carried and a committee appointed to apportion the cost to the churches, according to their strength.