This Sunday we will emphasize:  Sorcery, enmity, strife, jealousy, fits of anger and rivalries.  We must not walk in these ways!  We must allow the opposing power of the Holy Spirit to help us put to death these works and live in the fruit of faith!

I had been saved for about a year when I witnessed one of the craziest things I have ever seen in sports.  On June 28, 1997, Mike Tyson and Evander Holyfield fought a rematch for the heavyweight championship.  In round 3, we can see a fantastic example of a human being walking in the flesh, as Tyson purposely bit plugs out of both of Evander Holyfield’s ears on two separate occasions resulting in the fight being stopped and Evander Holyfield maintaining his title.

Unfortunately, the controversy did not end there.  After the referee ended the fight and disqualified Tyson, he continued to taunt and lunge at Holyfield, even after dozens of people flooded the ring to gain control of the situation.  Tyson, enraged over Holyfield’s alleged illegal head butting, retaliated by biting both of Holyfield’s ears.  Tyson continued to push and shove all the way into his dressing room and then over the next several weeks, became visibly enraged as he was questioned by sports reporters as to why he acted in such a barbaric manner. 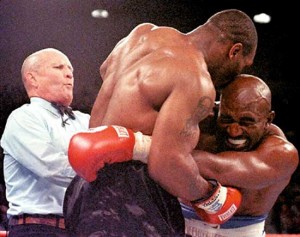 Several of the works of the flesh were clearly evident in Tyson’s life.  An incredibly gifted athlete that had reached the top of the heavyweight boxing world sustained a long and hard fall due to no fruit of the Spirit in his life.  Eventually, he and Holyfield reconciled, but Tyson’s long story book boxing career would never recover.