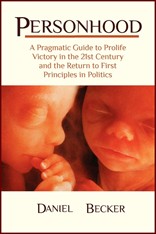 Instead of the contemporary political approach of seeking legal limits and regulation of abortion, Daniel Becker proposes a strategy for prolife activism that is based on an uncompromising biblical principle, known as “Personhood”.

Personhood is defined as:

“… the recognition by our culture and our government that each individual human life has an `unalienable’ right to life from its earliest biological beginning. This right to life extends to natural death, regardless of one’s disability, gender, race, dependency or manner of conception. The `unalienable’ right to life comes from God by virtue of the fact, that we have been created in His image and are thus imbued with a unique worth and dignity not found in the rest of creation.” (24)

Daniel Becker asserts that Personhood is defined by God (not governments) and is based on divine law, which declares that God is the creator, sustainer and ultimate determiner of when life begins and ends. Divine law is contrasted with natural law, which “… draws its authority on a presumed absolute demanded by Reason and supposedly shared by all humans, not on a moral absolute whose authority is God the Creator.” (37)

The book presents a history of Personhood from the first century onward, noting legal and theological literary sources. Becker powerfully explains what happens when government usurps the right to define who is to be considered a person and who is not. Of the many historic examples of slavery, suffrage and eugenics, Becker particularly notes the following: the 1858 Virginia Supreme Court ruling that a slave was not considered a person, but property; 1935 Nazi Germany`s legislation that Jews were subjects, not citizens; and the 2008 Cornell University declaration that crossing human genes and fluorescent Australian jellyfish genes (and then killing the resulting embryo) was acceptable because the test-tube embryo (child) is not considered a “person” under the US Constitution.