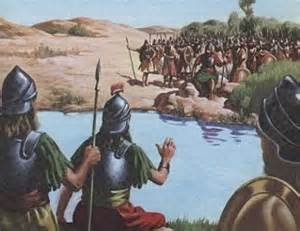 12 Abner the son of Ner, and the servants of Ish-bosheth the son of Saul, went out from Mahanaim to Gibeon. 13 And Joab the son of Zeruiah and the servants of David went out and met them at the pool of Gibeon. And they sat down, the one on the one side of the pool, and the other on the other side of the pool. 14 And Abner said to Joab, “Let the young men arise and compete before us.” And Joab said, “Let them arise.” 15 Then they arose and passed over by number, twelve for Benjamin and Ish-bosheth the son of Saul, and twelve of the servants of David. 16 And each caught his opponent by the head and thrust his sword in his opponent’s side, so they fell down together. Therefore that place was called Helkath-hazzurim, which is at Gibeon. 17 And the battle was very fierce that day. And Abner and the men of Israel were beaten before the servants of David.