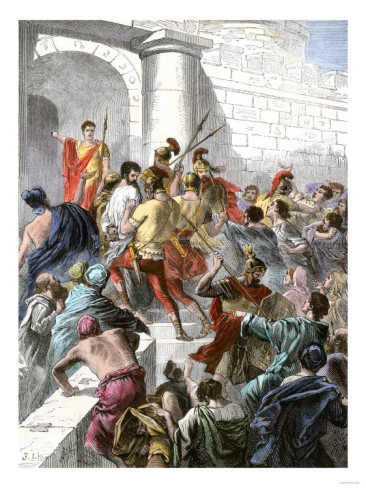 27 When the seven days were almost completed, the Jews from Asia, seeing him in the temple, stirred up the whole crowd and laid hands on him, 28 crying out, “Men of Israel, help! This is the man who is teaching everyone everywhere against the people and the law and this place. Moreover, he even brought Greeks into the temple and has defiled this holy place.” 29 For they had previously seen Trophimus the Ephesian with him in the city, and they supposed that Paul had brought him into the temple. 30 Then all the city was stirred up, and the people ran together. They seized Paul and dragged him out of the temple, and at once the gates were shut. 31 And as they were seeking to kill him, word came to the tribune of the cohort that all Jerusalem was in confusion. 32 He at once took soldiers and centurions and ran down to them. And when they saw the tribune and the soldiers, they stopped beating Paul. 33 Then the tribune came up and arrested him and ordered him to be bound with two chains. He inquired who he was and what he had done. 34 Some in the crowd were shouting one thing, some another. And as he could not learn the facts because of the uproar, he ordered him to be brought into the barracks. 35 And when he came to the steps, he was actually carried by the soldiers because of the violence of the crowd, 36 for the mob of the people followed, crying out, “Away with him!”