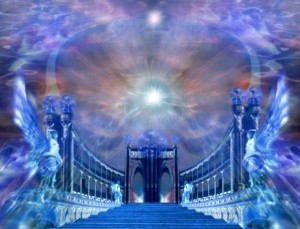 After this I looked, and behold, a door standing open in heaven! And the first voice, which I had heard speaking to me like a trumpet, said, “Come up here, and I will show you what must take place after this.” 2 At once I was in the Spirit, and behold, a throne stood in heaven, with one seated on the throne. 3 And he who sat there had the appearance of jasper and carnelian, and around the throne was a rainbow that had the appearance of an emerald. 4 Around the throne were twenty-four thrones, and seated on the thrones were twenty-four elders, clothed in white garments, with golden crowns on their heads. 5 From the throne came flashes of lightning, and rumblings[a] and peals of thunder, and before the throne were burning seven torches of fire, which are the seven spirits of God, 6 and before the throne there was as it were a sea of glass, like crystal.